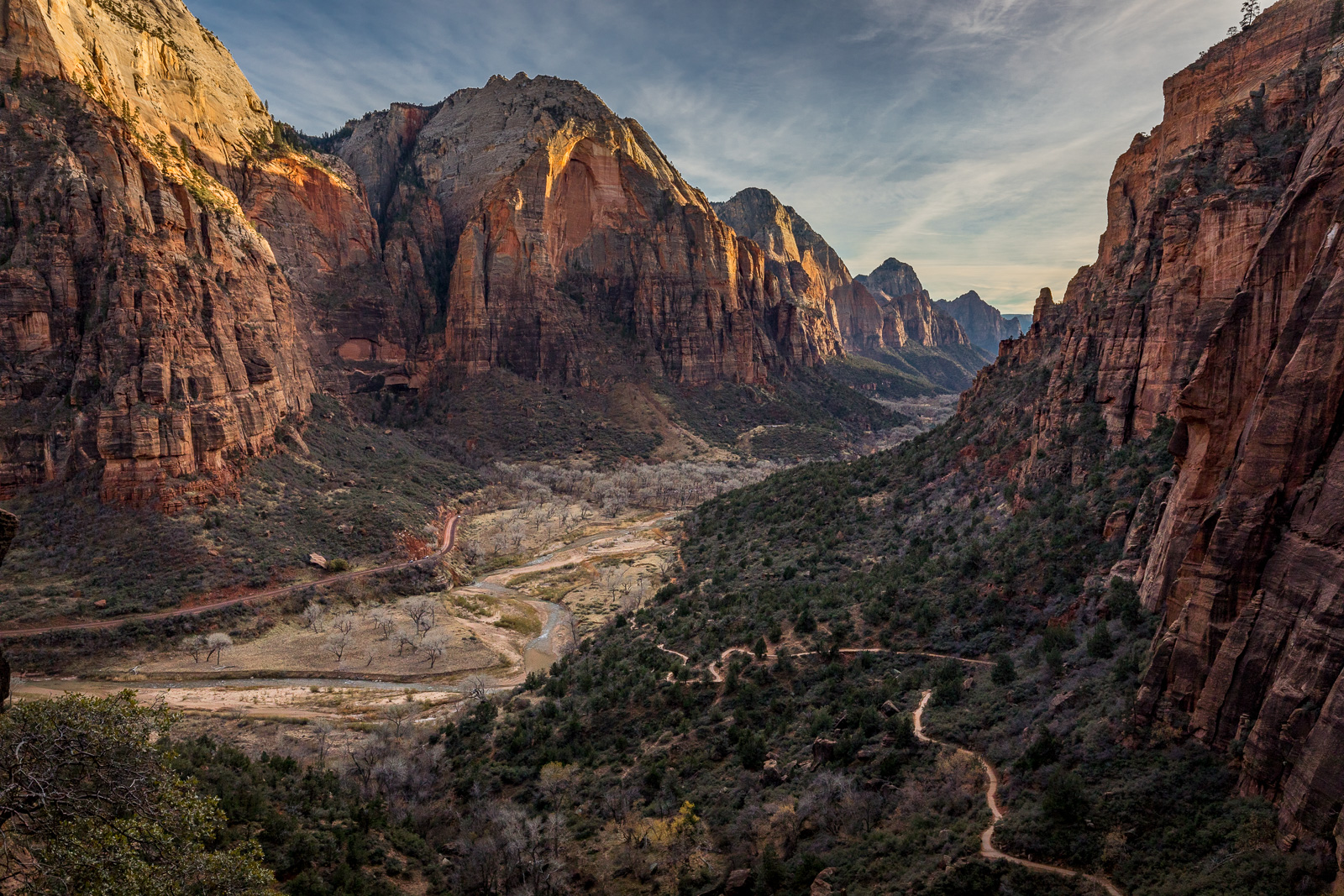 An alternate view of a famous trail

It was mid December and there was a warm spell between snow storms in the park. I  decided to go to Zion and feel things out up above Angel’s Landing. The temperatures that day were perfect in the sun but whenever the breeze picked up it was a bit icy.

The way up to Angel’s Landing went quickly but at the split in the trail above Walter’s Wiggles I decided to take the West Rim Trail instead. I wondered if I might be able to walk cross country over the Imlay Canyon. That idea went out the window pretty quickly when I found the non-barren slopes so slippery with deep mud I was worried I would make too much of an impact, not to mention the danger of falling into a slot.

Back at the West Rim Trail I headed up until I decided it was getting too icy/snowy for my non-waterproof, light hikers. Confounded again, I still didn’t want to call it quits, so, on the way back i noticed some running water coming out of a canyon tucked away almost out of site above the trail. I scrambled up there and it led me through some rough brush into a hidden narrow canyon that, rather than pinching off in cliffs, ended in a steep slope of sand and forest debris.

With some effort I made it up the unstable, collapsing slope. Instead of a breathtaking reward i was met with… level ground. I had come out into the back of a hidden basin. The weakness in the rock i had been following continued on the other side of the basin and according to my map it would lead up and over a mesa to possibly look down into Behunin Canyon. I thought, based on my very recent success that maybe i should give that i try. The climb looked very similar.

It was getting late in the day though, and i was tired of pulling dead logs on top of me while i buried myself in cold wet sand and moss, so i went in search of that breathtaking view by climbing up a nearby pyramid shaped peak. Ah. NICE.

On the way back I noticed I was on the wrong side of Refrigerator Canyon. That meant that I might be able to see Walter’s Wiggles from the opposite side, a short term goal that was easily pursued. Sure enough I was able to find a great viewpoint of the crazy switchbacks without any effort. What I did not know a time was that hidden in a Manzanera grove nearby was a couple of old NPS interpretive signs. Back in the 1930’s an official trail came through the area and the signs had been part of a viewpoint, now overgrown into obscurity.