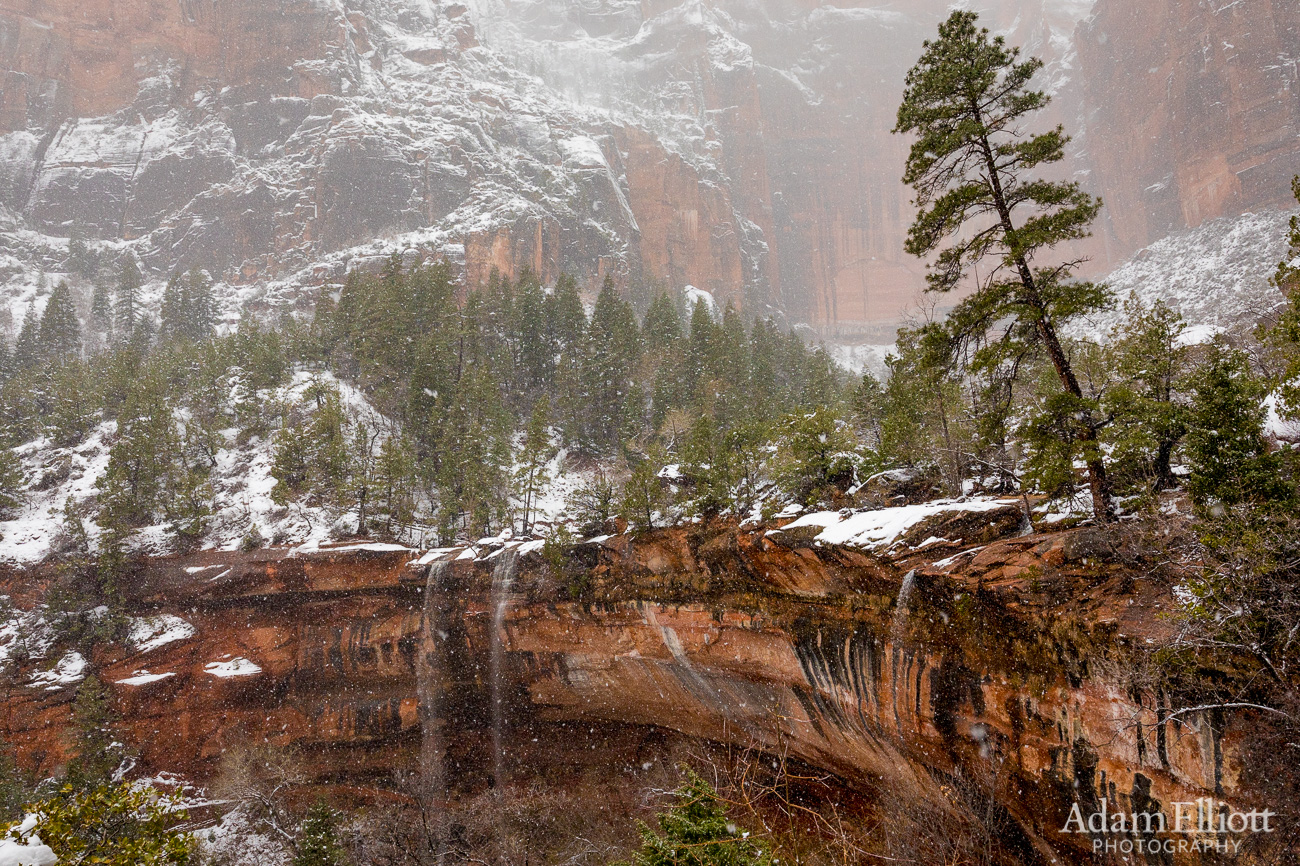 Hiking the Famous Emerald Pools Trail During a Rare Snowstorm

I’ve hiked the Emerald Pools Trail half a dozen times during different seasons and even at night, but last winter I had the lucky opportunity to hike it during a heavy snowfall. The trail is divided into three sections. The Lower trail takes you along an easy path, handicapped accessible, that allows you to see and even walk under the lower falls. The middle and upper portion of the trail are moderately difficult at points and takes you up to a small pool beneath what is normally a dry fall for most of the year. During heavy rain there can be a lot of water coming over the falls.

I had heard it might snow so I was ready to go early that morning. I had no idea if it would be crowded or not that day but another factor was that during the rare times that Zion gets snow, it’s usually at night. By mid-day most storms that come through have ended  and the clouds have begun to move on.

I was pretty skeptical most of the way to the park. We could see it was snowing at higher altitudes but at ground level even past Hurricane there was only rain. It wasn’t until we had driven almost all the way to the park before the clouds lowered and the storm intensified. After, that we were amazed at times just how much snow was falling. Without much wind most of the time, experiencing the park under nearly ideal snowy conditions was a real treat.

Although the trail to the lower falls is pretty much handicapped accessible, getting to the pools requires a lot of up and down, which can be very slippery in icy conditions.

The most surprising thing for me during the hike was the upper falls. It was the first time I had been there when it was flowing. I had hoped to get close but there was a constant barrage of ice chunks and stones coming down the lip of the falls. Hardly relaxing.

The wind began to pick up as our bodies cooled down and spray from the falls shooed us back down the trail earlier than we might otherwise have lingered. Snow was still accumulating but we were lucky that the recent weather before the storm had been warm. The ground along the trail was wet rather than icy. Much of the upper portion of the trail is up and down over stones so doing that covered in ice could have been unpleasant or required special gear.