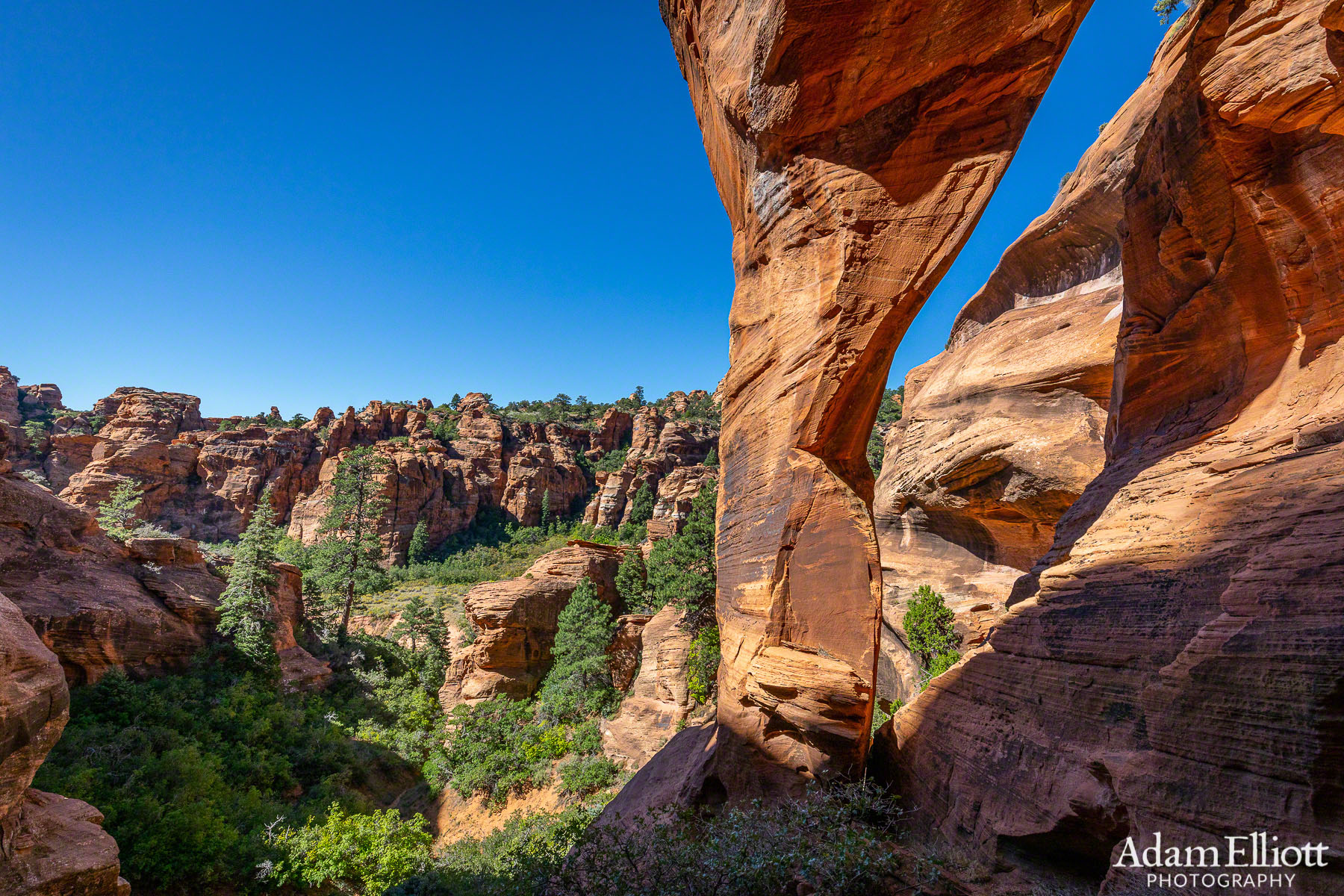 On my previous trips to the Red Butte Wilderness I had noticed some holes in the shadows of the canyon walls that looked like they could be arches. Or they might only be cavities. I took some pictures from  a distance because these places required some bushwacking to get to but even zooming in on the photos i still could not be sure one way or the other. It kind of nagged at me for a whole year and finally a friend of mine motivated me to get back out there and rule out those possibilities. So that’s what I did one day last September and it turned out to be a great decision. I found two large and undocumented arches. I’m not saying no one has ever seen them but there was certainly no sign anyone had been to them in a very long time. Some surprise pictographs, literally hidden, near one of them suggest somebody had certainly known about them hundreds of years ago. The vegetation may have been much different then, enabling an easier approach. Still, I could find no record of them. I mapped them, and submitted them to the Natural Arch and Bridge Society. It’s taken a long time but NABS has added them do the database and  published their own blog post about these and several other arches in the area.

Fisher Arch is the highest of them at 65 feet and spans 35 feet at its widest point! This one is high in a nook of a side canyon and nearly the whole approach is difficult bushwack. The bottom of the arch can be reached with a semi-difficult scramble up a small ledge. Next to the Arch is a cool triangular tunnel that leads to a long and very tall hallway.  I could not safely access the tunnel but the hallway penetrated close to 200 feet into the mountain.

The tunnel leads to this much large tunne but comes out about 25 feet up the wall. It’s really the beginning or extension of the canyon. The walls pinch almost together at the ceiling but it’s not completely enclosed. It extends well behind me and does eventually become a tunnel.

The second arch I thought this was just an interesting hole in the cliff until I got close and noticed it was separated from the wall behind it. It’s named Pietila Arch and it’s the most unique of the three. Water appears to drain through the bottom during rain so it might technically be considered a natural bridge, although it may not have formed that way. It’s also large! The height is about 44 feet from below the boulders but above the slickrock slide, and the span is about 20 feet. The back of Pietila Arch is really cool.

View on the left is the entrance to get to the back side of Pietila Arch and shows how far the wall extends up above the span. The right side is the view looking down from the boulder pile inside the arch.

The last arch in this post I found the first time I explored Red Butte but at that time I didn’t know anything about the World Arch Database. It’s the smallest and farthest into the canyon. You won’t find it unless you pop out of the trees in front of it. It’s still big enough to stand up in, providing you can climb up to it. The inside is almost circular and the arch has a fine structure to it. I submitted it as Adam’s Arch.