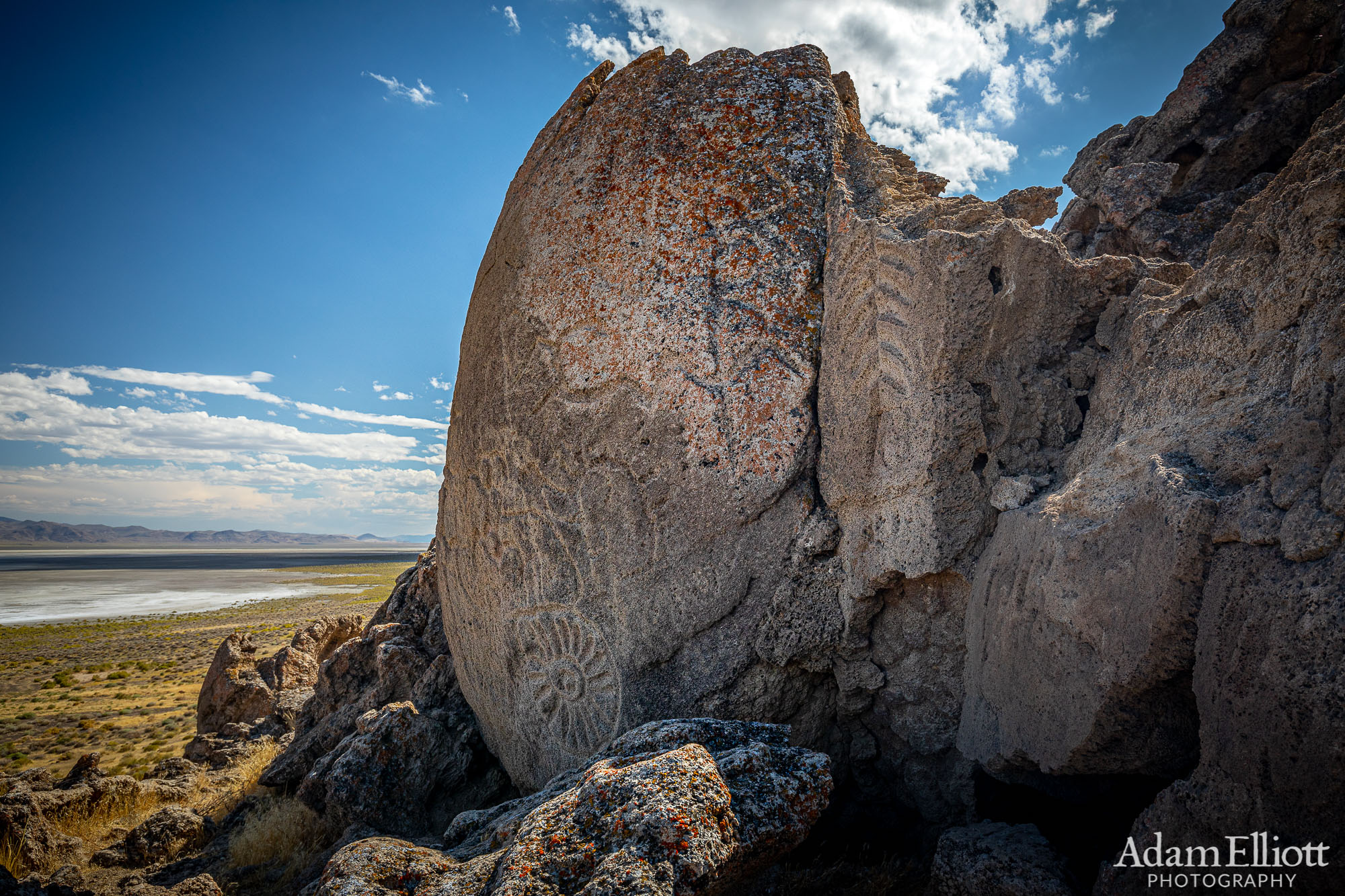 Somewhere along the shoreline of a dry lake in the middle of nowhere are the oldest petroglyphs in North America, at least for now. When I first heard about them a few years ago I was immediately struck with how exotic they felt compared to anything else I’d seen on this continent. Without having any idea about the age, it was obvious they were created by a very different culture. Adding to their mystique is the fact that they are carved into alien looking rock formations made up carbonates that grew underwater over eons. The glyphs are estimated to be between 10,500 and 14,800 years old, long before the oldest written stories. The younger date range is from the same era as the world’s oldest mummy, found nearby and known as the Spirit Cave Mummy (and also the Wizards’ Beach Man at 9,200 years old). In 2016 the Spirit Cave Mummy was determined to be a direct ancestor to modern Native Americans.

The cat seems to be out of the bag now but when I looked into visiting them in 2018 the location was not published anywhere. They glyphs are on the Pyramid Lake Indian Reservation and a permit from the tribe is required to visit the site. I didn’t know anything about how they were situated and I happened to show up at a terrible time of day to get pictures. They were in the shade while it was still super bright outside and the sun was difficult to keep out of the compositions.

Aside from photo difficulties visiting the Pyramid Lake Reservation was a very cool experience. All the ancient archaeology in the area has sparked my interest in learning about ancient Lake Lahontan. Lahontan was one of North America’s largest lakes at the time, similar in size to modern day Lake Huron, but full of mountain islands. The region would have been a paradise for ancient Native Americans to live, rife with fish and wildlife.

This definitely looks like an early habitation site. The ground under the rim looks thoroughly excavated.

The sacred Stone Mother. Approaching the formation is off limits even with a permit so this is as close as I got. The story of Stone Mother is a Paiute origin story. The end of it goes like this:

“One day she decided to sit near a mountain where she could look toward Pitt River country. She sat there day after day crying. Her tears fell so fast that they formed a great lake beneath her. This became “Pyramid Lake”. She sat so long that she turned to stone. There she remained to this day, sitting on the Eastern shore of Pyramid Lake, with her basket by her side.”

It really does look like a woman sitting next to a basket! Much more than other rocks that are supposed to look like people.  What’s interesting to me is the basket is broken open. To the south there are similar Shoshone and Paiute origin stories about Man escaping from a basket. For the Southern Paiutes the story is as follows:

“Tabuts, the wise wolf who decided to carve many different people out of sticks. His plan was to scatter them evenly around the earth so that everyone would have a good place to live, but Tabuts had a mischievous younger brother, Shinangwav the coyote. Shinangway cut open the sack and people fell out in bunches all over the world. The people were angry at this treatment, and that is why other people always fight. The people left in the sack were the Southern Paiutes. Tabuts blessed them and put them in the very best place.”

This is interesting because the reason the Stone Woman’s children are gone is because they constantly fought and Man (the Father) told them to leave and then went to Heaven. In Death Valley, the nearby Timbisha Shoshone have a similar story:

“The people were small then, so Coyote kept them in a large basket he carried on his back. After a long journey, Coyote grew tired. When he came to a place at the north end of the valley, he set his burden down on the earth. The moment he fell asleep, the people climbed up out of the basket.”

They called it Wosa, which means “Coyote’s Burden Basket”. Today it’s called Ubehebe Crater. During the time that the Winnemucca glyphs were being carved the Stone Mother was hundreds of feet under water. What interesting stories did they have to tell? There are tribes today with oral histories stretching back to the ice age. I would be willing to entertain that the artists who carved these stones might tell of stories of legends that originated in Asia.

Apparently the mechanism for growth is completely different, but to me the tufa formations all over the Pyramid Lake area look just like the fossilized corals of the Uyuni salt flats in Bolivia.