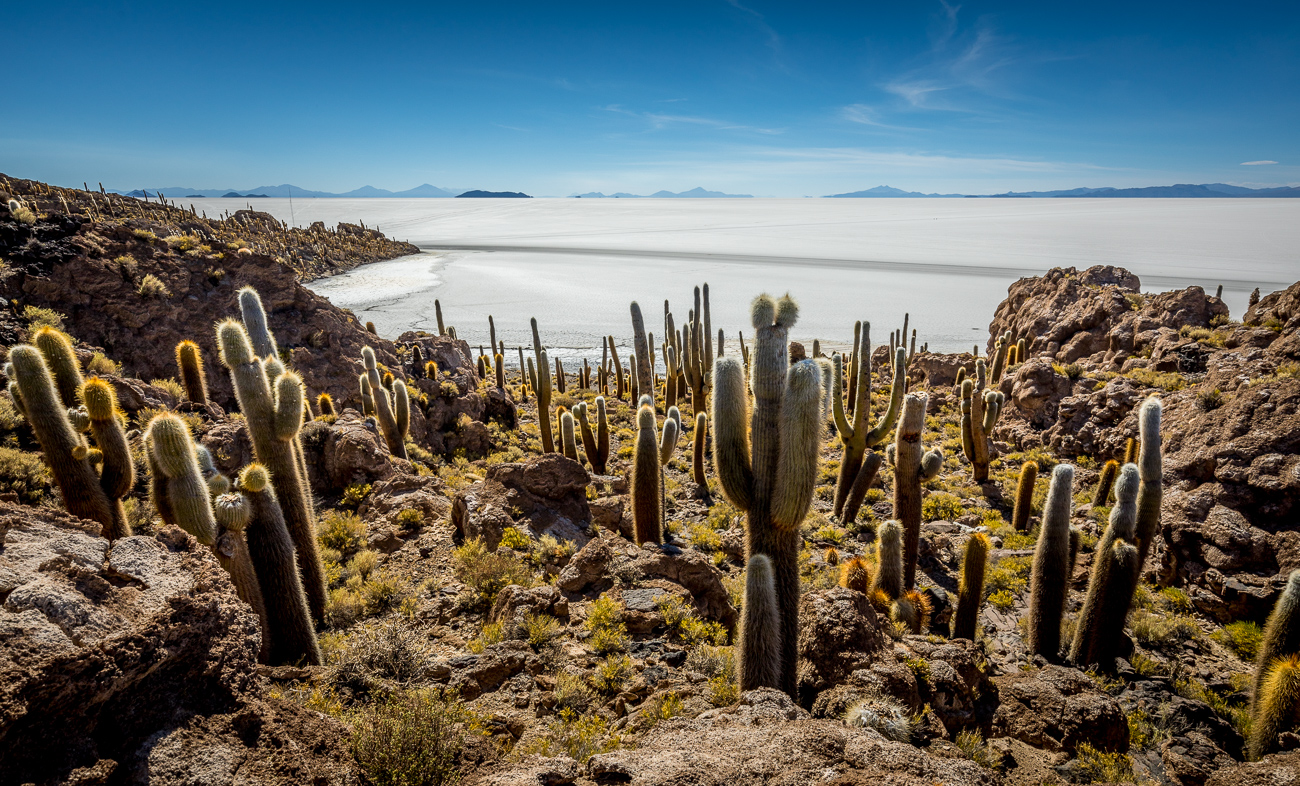 The whole reason for us visiting the dusty town of Uyuni was to see the nearby salt flats. Salar de Uyuni is the largest salt flat in the world. We did not enter the flats from Uyuni, instead we drove about 20 minutes north to a tiny town called Colchani, and stayed in the world’s first hotel made of salt, the Hotel de Sal Luna Salada. Salt is not the best building material. It dissolves in water and is highly corrosive, and so the hotel require continuous maintenance, as you can see in this National Geographic video. Even though the hotel was in plain sight, the “driveway” was so rough it took 10 minutes to traverse every time we came or went. But the hotel was a pretty cool, unique place to stay in.

We were not there during the rainy season so we did not get to see the infinity reflections but because it was dry we were able to drive fast and securely across the incredibly bright white landscape. We drove out to an island 5o miles away from the “shore”. The island is not visible from the edge of the flats, and for about half the distance we were driving towards an empty horizon. In such situations a GPS is highly recommended.

The Salar de Uyuni and several other large salt flats in the area were once the bottom of the ice-age era Lake Minchin, like Lake Bonneville in Utah. Far out in the middle of the former lake are numerous “islands”.  When we could first see the island, it floated in the sky like a mirage for many miles but soon after it fell to the ground we arrived as Isla Incahuasa. Similar to arriving at a beach after a long boat ride we were ready to get out and explore the island.

From what I’ve read these islands in the lake are the peaks of ancient buried volcanoes, but far more interesting is the fact that once you start walking across them you realize that the islands are covered in coral. It’s hard to accept, 12,000 feet up in a bone dry desert, you are cutting your hands on a coral reef. So, despite being islands in a sea of salt they were at some point completely under water. The islands are covered in  a forest of thriving cacti that grow up to 39 feet tall. The icing on the cake for this surreal experience was that a few months later I found out the area was a location featured as another planet in  Star Wars: The Last Jedi.

I had a great time out on the salt flats and the island. It was a good stress reliever after our horrible drive the previous day. Another island, “Fish Island” was not too far away but we did not have enough gas to get there. The same electricity outages that plagued Uyuni had shut down the gas station in Colchani so we were unable to fuel up before our adventure. Even getting out and back to Incahuasa was really pushing our luck, so we had drive straight back to town.