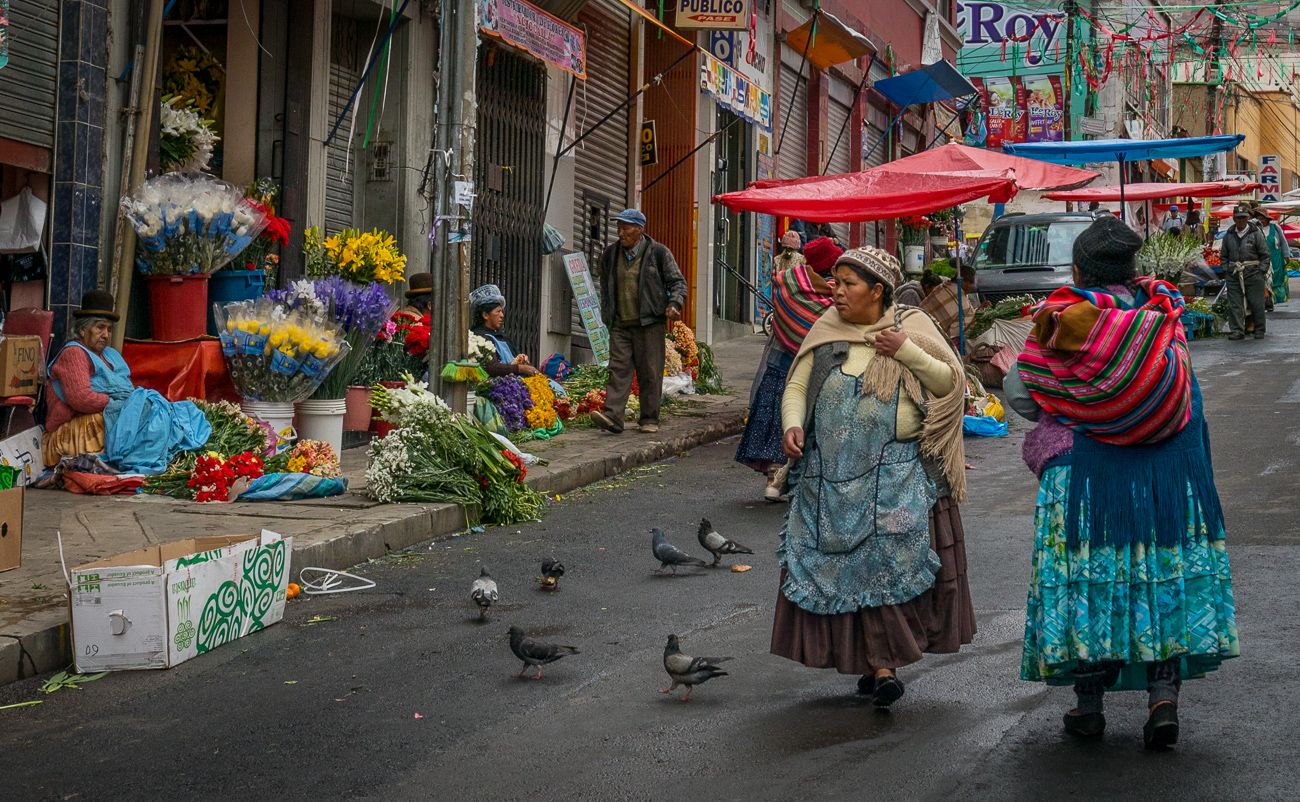 The view of La Paz from El Alto is amazing. We came to the canyon valley rim at dusk, trapped by insane traffic winding miles down the side of the canyon walls to downtown La Paz, where the traffic was equally insane but with the addition of mobs of people everywhere. It had been raining and just as we came to the sight of spiraling lights winding around endless hills of buildings during the blue hour, the clouds parted enough to see the crown of the landscape, Mt. Illimani, covered in fresh snow and glaciers, towering over the towering city at a height of 6,438 m (21,122 ft). That’s higher than any mountain in North America and the highest mountain I’ve seen in person.

We arrived at such an hour because La Paz was our second choice of a place to stay for the night. Leaving Salar de Uyuni we travelled along paved, PAVED!!!, roads to the town of Tiwanaku to look at an ancient pre-Incan city that may have been settled 4,000 years ago. The ruins were not as impressive as I had hoped but our plan was to stay in town overnight and then head to Lake Titicaca the next day. We soon scrapped that plan because we were unable to find sufficient, trustworthy food for dinner, and we decided the only real looking hotel was not acceptable. It was the kind of hotel where they give you your toilet paper along with your room key. Once we were in the rooms we discovered they were unheated and already cold enough to require a jacket despite it being late afternoon. We were the only guests in the building yet Ben’s smelled terrible. We thought we might just deal with it but after having no luck going out to find dinner we went back, grabbed our stuff, and fled.

La Paz, the highest capital city in the world, has the most insanely clogged streets of anywhere i’ve ever been. Ben almost lost his mind as we tried to get from the valley rim to within walking distance of the hotel we had chosen. But, La Paz has the most surprising solution to that traffic of any city i’ve visited. Crisscrossing the city along several long corridors are an extensive gondola lift (here is a video) system of public transportation. It seems like a gimmick at first but it really works, reducing travel times that could be well over an hour to a relaxing 20 minutes. We were fortunate to visit within the first year of operation of this system and several more lines are in the process of construction. As a result we did not have to drive or take a cab at all during our stay in La Paz.

We walked around La Paz all day seeing the sights and attractions and at one point we took the cable car up to the politically separate city of El Alto. Nearly 1 million people live in El Alto at an elevation more than 13,600 feetEl Alto is the highest major metropolitan area on Earth. Most of it is a ghetto, or at best poor suburb, and it goes on forever. It’s the biggest reason it takes so long to get into and out of La Paz. Many of the streets are dirt and everything has a half finished unplanned look, with 30 feet of rubble between the street and the buildings, or entire blocks of dirt and rubble with one 6 story building. We saw a lot of these same buildings all over El Alto that had a styling like a toy car or cheap Chinese restaurant aesthetics. We found out later this wasn’t Chinese influence but rather a home grown style of facade by a nationally famous architect Freddy Mamani.

For lunch we travelled by cable car to the other side of town, which was much nicer, and ate at the famous Gusto, founded by famous Chef Claus Meyer. The food was amazing, probably the best flavours I experienced in  2017.