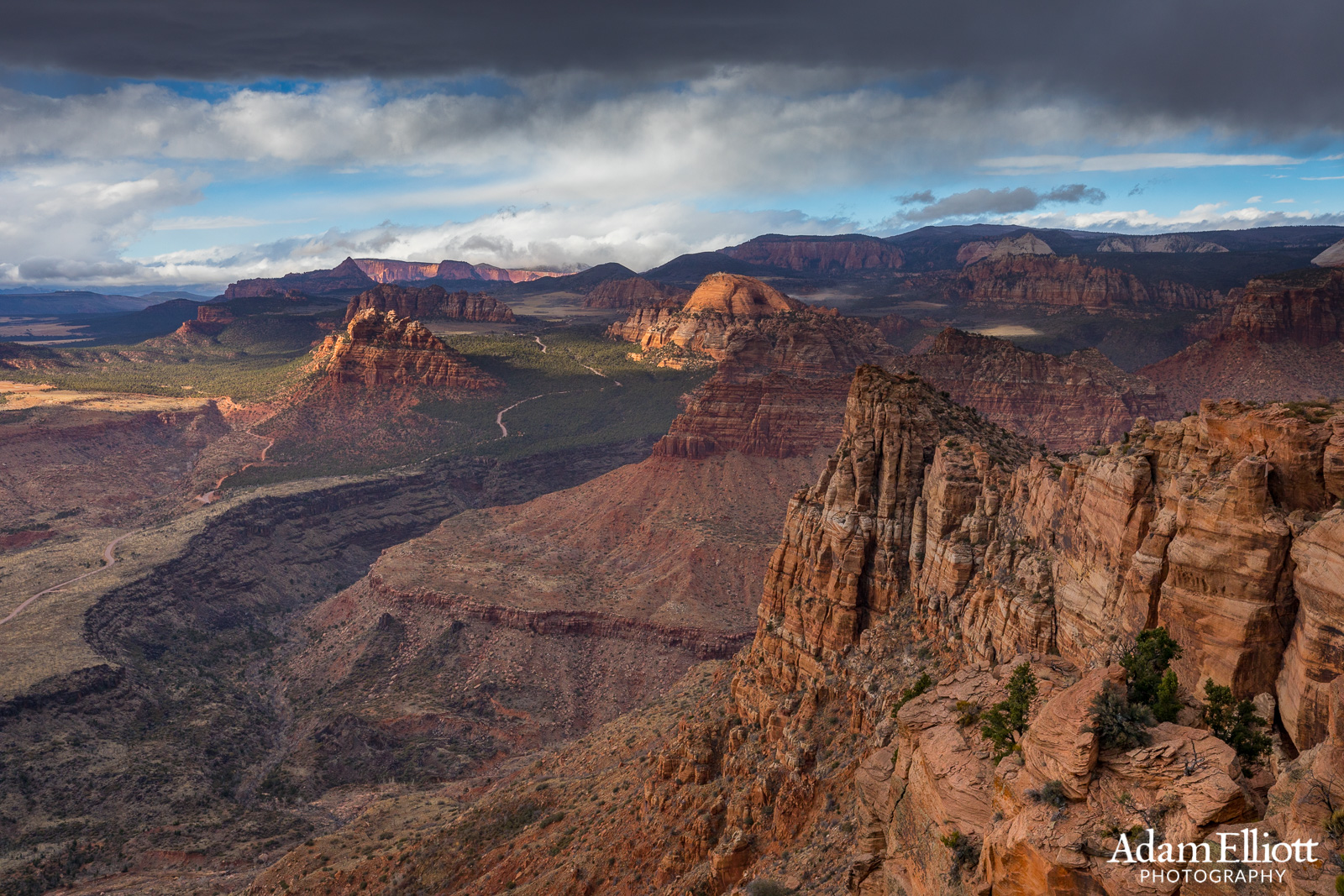 One of the last places i need to visit in Zion is the Terry Wash drainage but it’s difficult to reach. The most common route seems to be using ropes off the West Rim Trail. Another way is to walk up there from the South Fork, so I decided to see how long and how hard that is. Terry Wash would also most likely be an overnight trip but I just wanted to scout it out. The way to get there happens to also be the same way to climb up to Cougar Mountain, and that was something that can be done in a day. So, again, I decided to kill two birds with one stone.

The way to get to Cougar Mountain is to head up the Right Fork and then walk all the way up Trail Canyon. Cougar Mountain is huge. It’s really a miles wide mesa with various rock formations all over it. One of those rock formations is called the “summit” and is on the opposite side of the mesa as the pass for Trail Canyon. It’s a lot of mileage so I was very interested when I read about a “shortcut” in Courtney Purcell’s summit guidebook on Zion National Park. This supposed route made the climb into a loop that was several miles shorter. There was also a single picture in the guide book of a really cool looking arch I wanted to see. In fact, I was much more interested in the arch than the summit, which is not much higher than the rest of the mountain.

Trail Canyon is a trudge through endless geologic disasters and thick brush or tangled trees.

It gets too steep for bushes right up there where the bushes stop. After that you start to slide down, along with dead trees and loose boulders, until you get to the bottom of a “V”, which feels like the bottom of an almost empty hour glass. The cliff wall at the bottom of the sieve has broken apart. The obvious thing to do is follow that exit, but it leads to cliffs that are not mentioned in the book. The book also doesn’t mention having to climb back out of that pit, but that is exactly what you have to do. On the top is a chimney downclimb between a cliff and a huge boulder tucked behind a high rock pillar. I was unable to find the leverage to do that downclimb safely. But, clearing away some rocks and logs nearby I uncovered a tight tunnel behind the boulder that was a much safer and easier way to descend. After that it was an extremely unstable descent down a washed out gulley through breaks in small cliffs. Pretty much every single rock was loose, and at one point I had to jump out of the way of a rock that was size of my torso falling down on top of my head after i had passed it

Coming down the west face of Cougar Mountain was probably the most stressful thing I did last year. Looking back at it from the parking lot it looked ridiculous. You cant’ even really see the notch where you begin the descent, so I took this picture on another day from a little bit to the north and looking straight into the notch. This shows the route down and the gap is where I had to go down the pit, back up the other side, and down through the tunnel. While it is indeed a “shortcut”, it’s so dangerous it barely saves any time. I suspect it may have been damaged or washed by major storms in recent years, and is now more difficult than when it was originally written about. Definitely a memorable trip!

I don’t often publish my exact routes but the impact of this hike is low and the exit is critical.  For those interested here is the route and mileage.