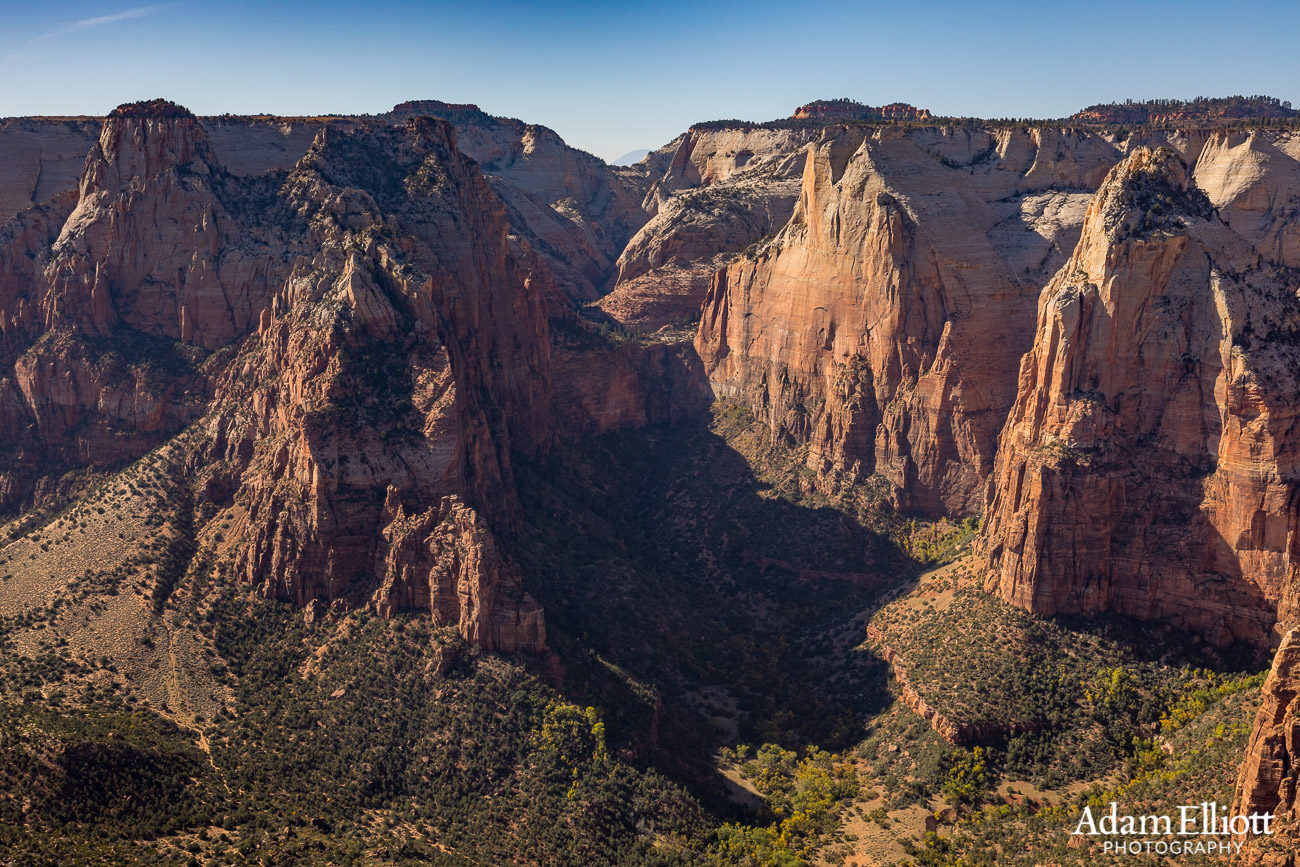 Mountain of the Sun

One of the best climbs in Zion

Mountain of the Sun is my favorite peak to climb in Zion National Park. I did it first in 1995 and as the years went by and I climbed more  peaks in the park I always remembered it as especially thrilling and scenic, even after Kinesava and Cougar Mountain, two peaks that burn more calories in the long run.

Twenty-two years and 1 month later I decided to do it again. I wondered if I would still be able to do a hike from my early 20’s that I remembered as very difficult and frightening. Additionally, I never had any pictures of it the first time. But guess what, this time I forgot to charge my camera battery! I’d already walked about a mile before I took my first picture and when I did i noticed my battery indicator blinking on it’s very last bar. I can’t even remember the last time I did that, so unfortunately with this second climb I still had to ration the pictures I took. To be safe, I decided to only use my phone until I made it to the summit, then start using my real camera and see how long it lasted. It’s a good thing too, because it did not last the whole way back! So this will be a mixture of some pictures from my camera and some from my phone.

Mountain of the Sun is simultaneously one of the most visible peaks in the park, one of the least known about, and one of the least visited. It’s visible from the most of Springdale, from the Visitor Center, and towers directly over Zion Lodge. When I climbed the peak in 1995 it was mid September and I was only the 4th party to sign the register that year. There was one other party who had climbed it a few days prior, but did not sign the register. That party was Reinhold Messner. If you don’t know who Reinhold Messner is, he was the first to climb Everest without oxygen, the first to solo Everest, and the first to climb all 8,000 meter peaks on Earth, among many other things. Instead of signing the register, he scrawled a little note about the climb on a bubble gum wrapper.

One of the reasons I like the climb is that it offers so much variety, involving climbing out and into 4 different canyons in addition to the final, very exposed Class-4 (some descriptions rate it at 4+) climb up the final summit. If you slip it’s a 1,000 foot freefall to the bottom of Employee Canyon. But the exposure is even worse than that because you’ll be looking all the way down at the Lodge far below Employee Canyon. It’s also an out and back hike. That means you also have to do a Class 4 downclimb. I did not have ropes so the downclimb required total concentration to keep my wits. Your mind must continually move forward making decisions. I felt a real time limit for every move before my muscles started to cramp up.

Because of all the up and down climbing it’s very strenuous, involving over 3,000 feet of elevation gain and about 7-8 miles of off trail hiking, scrambling and bushwacking. But the difficulty makes the top all the more rewarding, and the views from the top of spectacular. Despite the difficulty and danger I would still like to climb the peak a third time.

There are a lot of obstacles in getting to the base of the mountain. This is one of them. Going down it’s pretty easy to take the landslide but going up that would not be fun. On the way back I opted to climb the ledges. That came with its own challenges.

Eventually you will get to the unavoidable Class 4 section. You will know when you are there. There is nowhere left to go but straight up. If you fall it’s at least a 1,000 foot drop. Ropes are recommended and I saw some webbing tied to some bushes above the cliffs once I got up there.

A great, unique view of Zion’s main canyon with the Lodge straight below. On the far right in the distance is Angels Landing, its summit far below. Left of center the skyrocketing tusk of white cliffs is Jacob Peak, which leads over to Lady Mountain. Lady Mountain is on my wish list. Below Jacob the long wall of reddish cliffs is Mt. Moroni. To the left of this whole scene is the header picture of this blog post. If you look back up there that is Court of the Patriarchs and a unique unobstructed view of  unvisited Birch Creek Canyon, which drains into the courtyard from high above.

I could not believe they still had my name in the register from 1995! They had put all the previous years into a spreadsheet but in the process they misspelled my last name and said I was from Huntsville Utah instead of Huntsville Alabama. Oh well, they probably messed up a lot of peoples info, but I appreciate that it’s all there. During my long rest period on top I noticed a few other things are interesting in this list, and on the other pages I looked through. One is that even though it’s been 22 years and Zion has, in that time, become one of the most crowded parks in the country, the number of people who visit Mountain of the Sun has remained virtually the same. The number of rock climbers coming up the northwest face has increased considerably but the number of hikers has actually decreased, I think. The other thing that really stuck out at me is that the same names pop up on the list over and over. It seems climbing this mountain is addictive, and adds you to an exclusive club.

Finally out of Employee Canyon and heading towards the head of Spry Canyon. This was the last picture I was able to take before my battery ran out. Too bad because the light was entering the golden hour! After this I still had to climb out of Spry Canyon and traverse over to the final descent, into the canyon where I started off this very epic day.