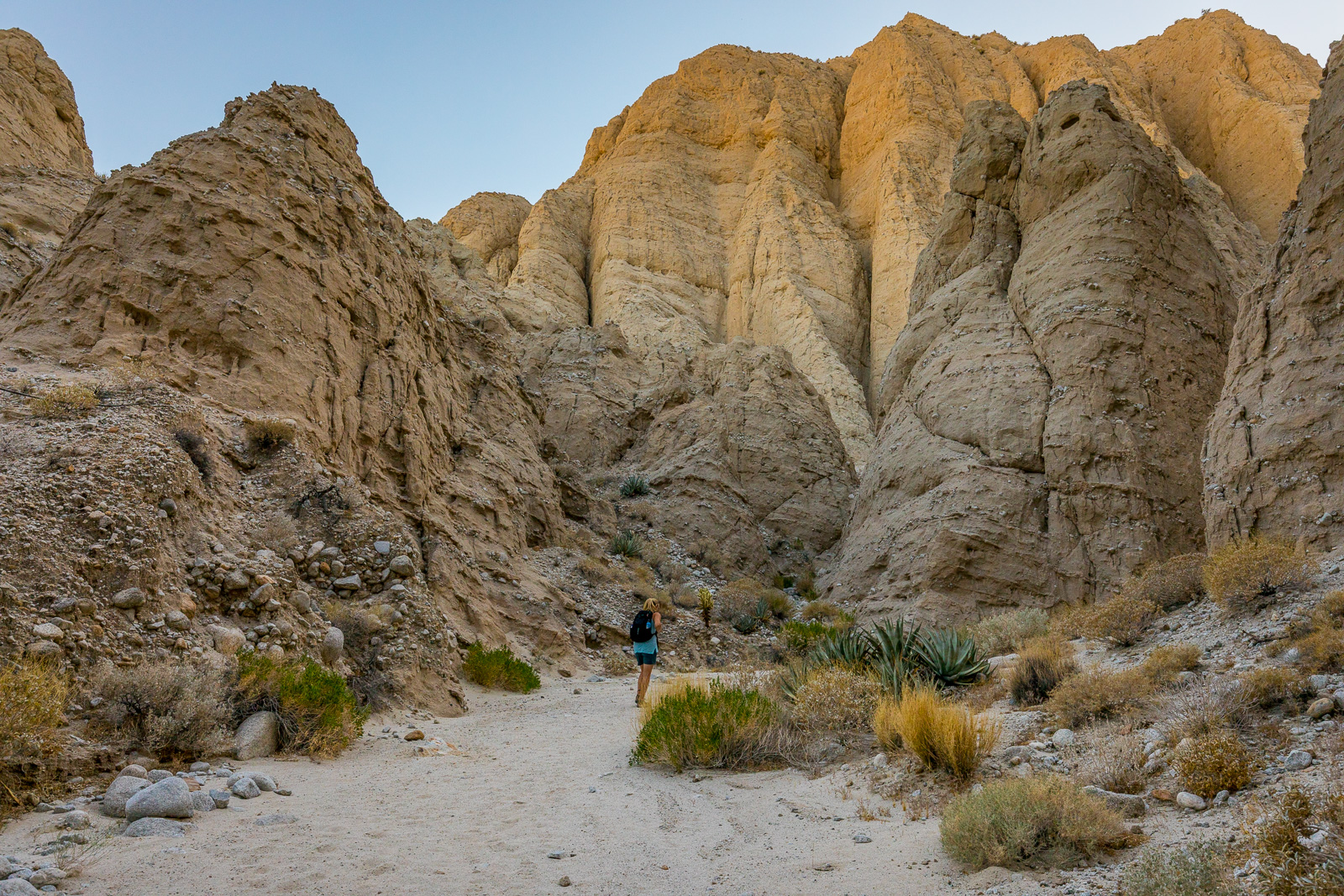 A Trip to the Mud Palisades

It’s become a tradition in the last few years to make a trip down to Borrego Springs on Memorial Day weekend for a birthday party with my friend Jimmy Gordon and a get together with our California friends. It’s a long drive from Utah so I always try to plan some other extra curricular activity to see a new place. At the beginning of June you can expect it to be above 100F every day, so it’s not the best time for hiking. For that reason I pick out shorter hikes that can be done in the evening, or late day road trips.

Photos by Jimmy Gordon. We like to try and rent out the Palms at Indian Head hotel because it has a huge pool.

Last year I snuck away for just enough time to see Fonts Point. The year before that we checked out The Palms trail. This year I had hoped to do something more substantial, but it was so hot I decided on a road trip to the southern region of Anza Borrego State Park. We drove the Split Mountain Road south of the Mad Max style settlement known as Ocotillo Wells.

From Borrego Springs it took us about 1/2 an hour to get to the road. Split Mountain Road is heavily trafficked, so travel is slow over the rough washboard. The spectacular Split Mountain portion of the drive is within the first few miles of the trip, and for many this would be a fine turnaround point. Beyond the mountain the terrain opens up into mud badlands and folded sedimentary layers and the road splits into enough side trails that a map is highly recommended.

One of the side trails is Sandstone Canyon. It’s a drivable slot canyon that reminded me of Titus Canyon in Death Valley but from what I hear it eventually becomes a challenging jeep trail. We just drove up for about 1/4 mile to get a feel for it and then turned around because it was pretty late in the day.

I had decided our main destination was a place called The Mud Palisades. We had actually hoped to find some of the fabled mud caves but the locals are generally tight lipped about their exact location. I didn’t have time to research it much online. I figured a place called the Mud Palisades would be a good place to start.

Eventually we got to the end of the road after an hour of driving up the wash. The temperature was still 100 degrees but we only had to walk about 100 yards in the sun before we entered the cooler shade of the canyon.

The “mud” that makes up the palisades is 20,000 feet of sediments from the Colorado River deposited as the river filled up the abyss called the Salton Trough, created by the San Andreas Fault 8 million years ago. As the deep basin filled up it buried every single organism that died in the area. About a million years ago the San Jacinto and Elsinore faults tilted the sediments and squeezed them up high above the ocean. The rise of the mountains created a rain shadow that turned the whole area into a very dry desert. With virtually nothing growing on it, the sediments now are exposed to the elements, eroding quickly and exposing millions of fossils ranging from anything you can imagine under the sea to birds and even giant Sand Mammoths.

The sediments have been turned into rock that is in many cases only 5 million years old or younger. In some areas that doesn’t seem like long enough, as thousands of much older river stones can easily be plucked out of the canyon walls. There are areas where the walls are so soluble they look like melted candle wax.

I enjoyed the unusual nature of the Mud Palisades. The trip up-canyon is short before it cliffs out at dry cascades that pour out of narrow slots high above. We made it back to the paved road a little faster, just after dusk. On the drive back we could see a lot of night riding by ATV’s with huge lights climbing up the high sand dunes area called “Blowsand”. It looked fun.