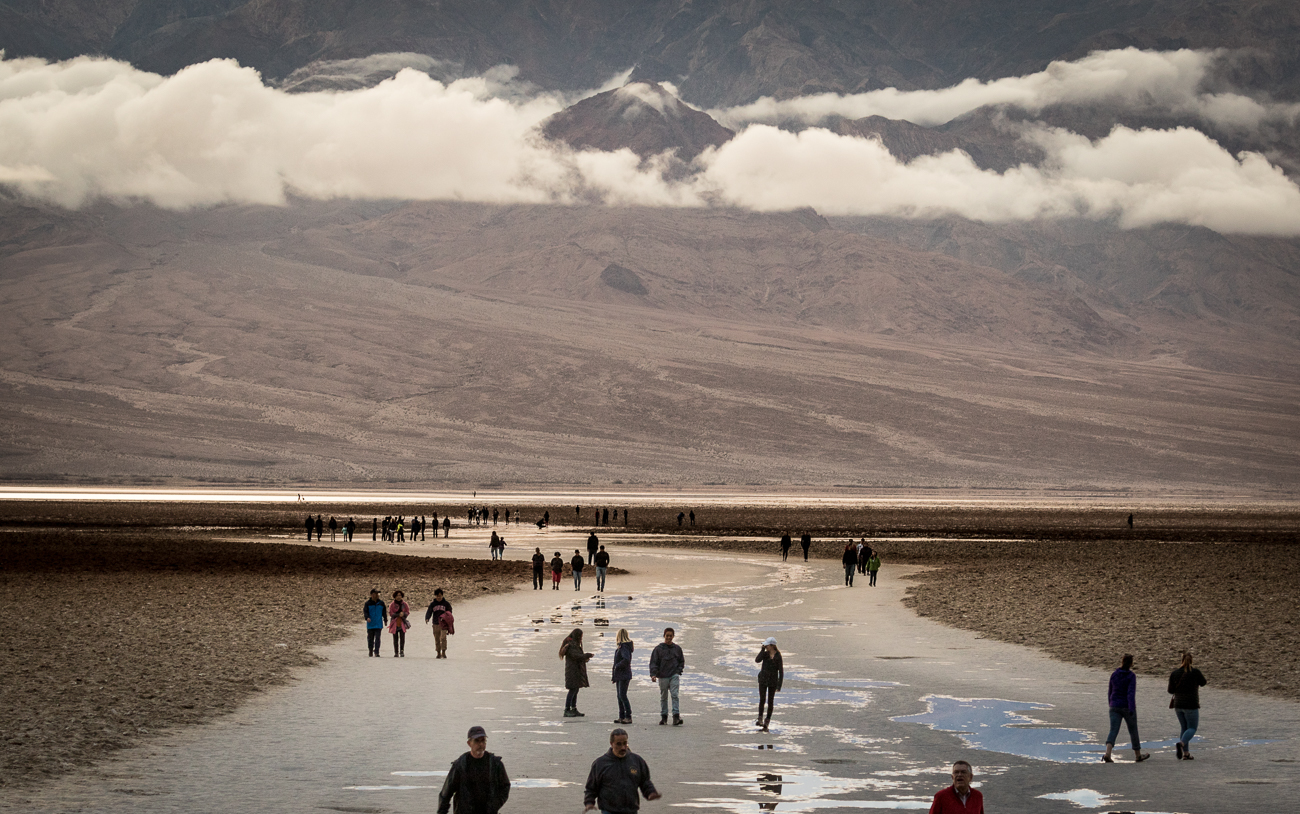 A rare opportunity to see flowing water at one of the driest places on earth.

Over the winter of 2017 California got pummeled by some major rain storms. During the week of storms that caused the failure of the Oroville Dam I decided it would be a good opportunity to go and see what Death Valley was like during one of the rare times it actually rained. I had never been there in winter and Maree had never been there at all. It’s a tricky desire. On the one hand, you want to see some rare weather/geologic occurrences that probably involved dramatic visuals and possibly destruction. On the other hand, you don’t want things to be so bad you become stranded or in danger, and you want access to the areas you want to see flooded.

Even the drive from Utah to California was exceptionally unusual. At mid day the Mojave was as dark as a sci fi movie with very low, brooding clouds lit underneath by city lights. But, I definitely noticed a lot of brand new “green” in the desert along the way. I had decided I wanted to check out the Ash Meadows Wildlife Refuge on the way but the roads were flooded and the trees were still dead and wintery, so we turned around and went to Dante’s View instead. That was briefly very cool. It was completely shrouded in fog, but for less than a  minute the clouds parted and we could see all the way  up the valley where rivers of fresh water were flowing into Badwater. That was literally for just a few seconds and I didn’t have time to take a picture, not knowing it was my only chance.

From our first view high above the valley it was already obvious there was a lot of water flowing out of the mountains.

As we drove farther into the park we soon noticed that nearly every road was closed that wasn’t one of the few paved roads, and even a few of those were closed temporarily as machinery cleared off broad flats of flood debris. We had to drive across several sections of buried pavement to get to badwater. With nowhere else to go, Badwater was very crowded, plus it was the best way to walk out to the water.

That night we stayed in Beatty. I had some real sympathy for the hotel crew. There was mud absolutely everywhere in the parking lot and up and down the hallways of the hotel. There wasn’t anything that could be done about it. Every single person who had gone anywhere in the park had a car that was completely covered in mud, and very likely had mud all over their pants and shoes.

The plants were loving the rain. The weather blasted stones did not care. I’m amazed some of these smaller stones have been facing the same direction undisturbed for so long.