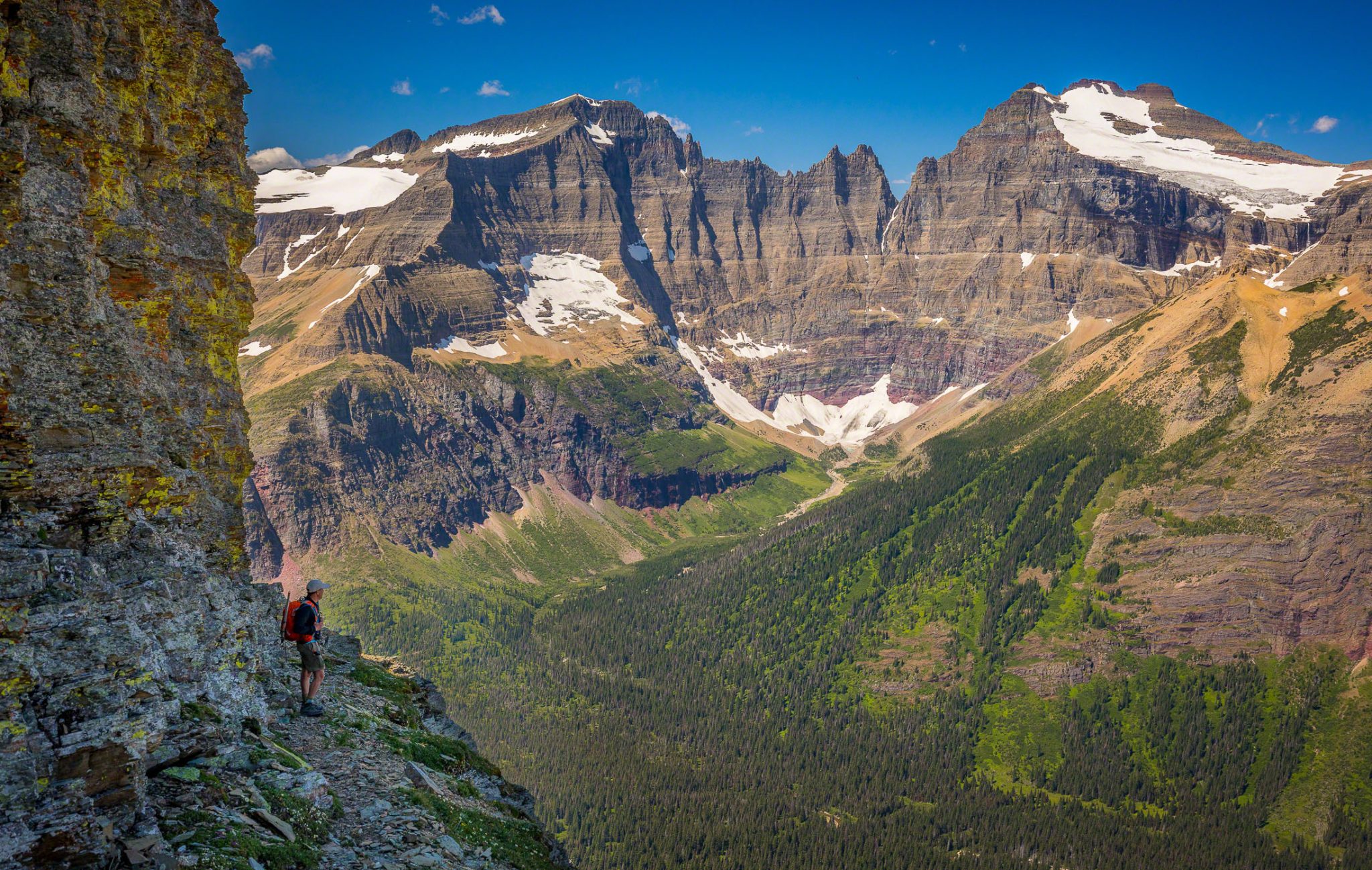 I worked in Glacier National Park for 3 summers in the early 1990’s. Things were peaceful back then. The first summer I worked at Swiftcurrent Motor Inn and noticed the bedding in the amphitheater on one of my many climbs up Mt. Henkel reminded me of what I’d seen in pictures of the Grand Canyon. So the next summer I went and worked down there on the South Rim. But, to me, the Grand Canyon was not nearly as impressive as the mountains of Glacier Park. The next summer I returned to Swiftcurrent, and the summer after that I tried Rising Sun, just for quick access to another area of the park. During those three summers I summited 16 individual mountains, including Mt. Cleveland, and hiked over 325 miles (close to half of the trails in the park).

I returned to Glacier for a reunion of Swifties in 2001 but I had not been back in 18 years! That’s a long time! So this summer when I went to visit my friends from that first year, Jodi and Stephen Schultz Smith, I had to decide what to do, after having done so much already and after so much time had passed. Jodi and Stephen met in Glacier at Swiftcurrent that first year and later got married!

As far as options, something that had always nagged at me over the years was my attempt long ago on an off trail route called the Pinnacle Wall Traverse (now also called Ptarmigan Wall Traverse by some). The route was pioneered by legendary local climber J. Gordon Edwards and is a 4 mile route along a very narrow (at times) set of goat trails that stretch from near Ptarmigan Tunnel all the way to Ahern Pass. The route often includes route finding, great exposure, and sometimes a little climbing. The slow nature of the travel can make the trip a very long day, well over 12 hours.

The beginning is confusing because there is more than one goat trail to choose from. Originally I chose the wrong trail, which shortly ends in dreadful cliffs. Stephen had done the route twice so he agreed to take me along on the hike again, with one of his friends David Koel. I had never met David but we readily agreed to risk our lives together for an entire day.

The view from Ptarmigan Tunnel towards Elizabeth Lake was just a short diversion before we got down the real business of the day.

We made great time that morning but when we hit the wall the hours started bleeding by. The trail is not maintained of course, and can change over time.  A couple of times we seemed to lose the trail but it was always a short climb up or down from where we were. Eventually we ended up on top of the wall itself, standing beneath an enormous and incredible monolith of rock sometimes called “Ptarmigan Spire.” It had been 9 years since Stephen had done the trail and the problem was, there didn’t seem to be a trail up there. He did find some goats, but they offered no advice. Because of how long it had been taking and a few other factors we decided to try and just go down the east face of the wall, rather than go back. That in itself was a daunting task and took an hour of downclimbing cliffs before we got to the safety of the skree below.