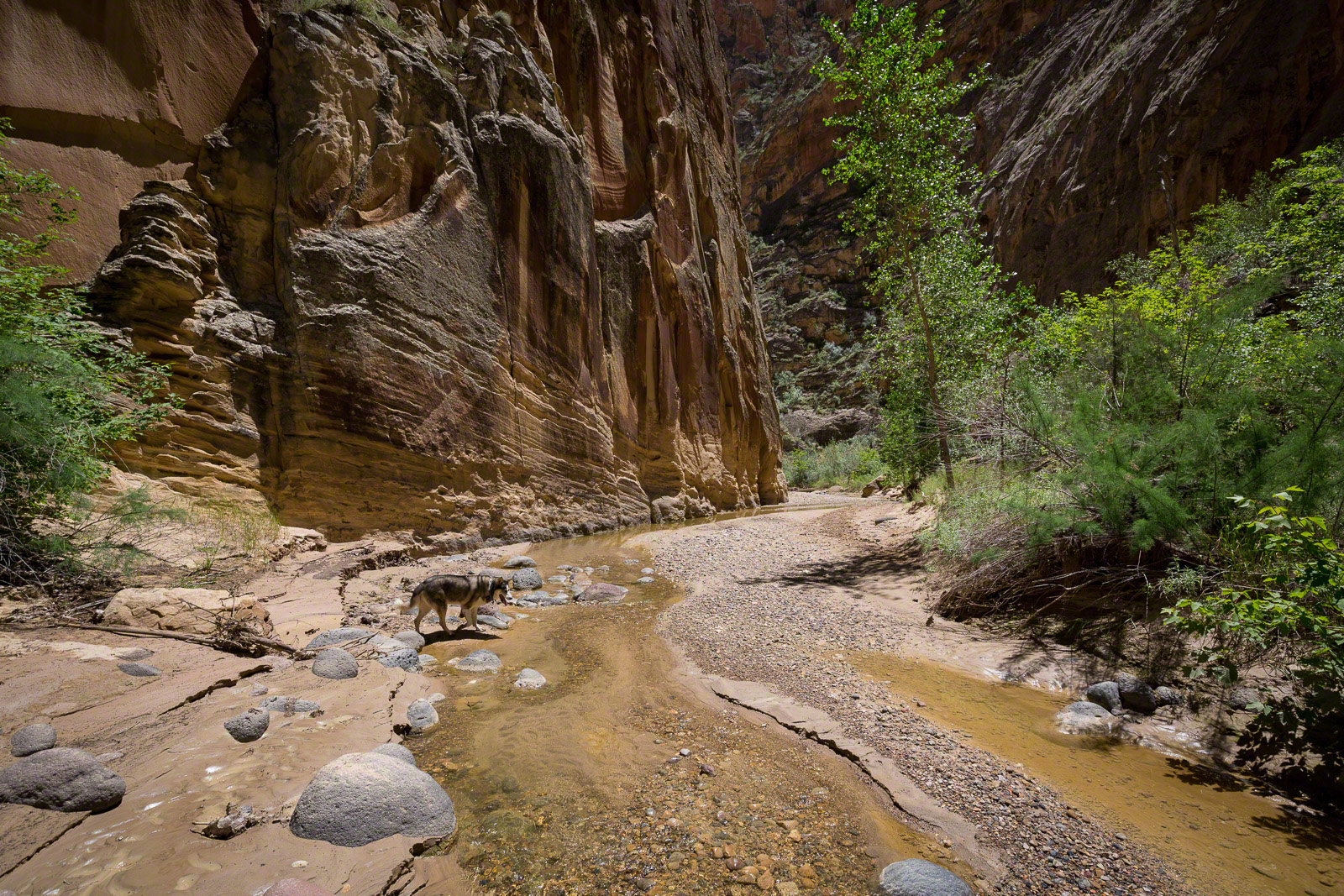 A Hike Downstream Starting From Escalante

Three years ago I went hiking up the Escalante River with my friend Jimmy from near the Calf Creek Falls trail, where the road crosses the river. The farther we went the less-used the trail became. We only went a few miles but it was very scenic. During last summer’s visit I decided to hike downstream from the Escalante side of the river and see how far I could get with Maree and the dog.

Because the “river” passes through some private property the trail begins on top of a hill just east of town, down a tributary canyon that is open and hot. I didn’t think it would be too hot at the beginning of July, but a few days before our trip a heat wave came through and raised temperatures about 12 degrees above normal. That was enough to tip the scales out of our favor. Also working against us was a lack of shade in this part of the canyon and we were going in close to mid day.

I knew we would have to walk through several meandering twists before we made it to the Escalante River, but it seemed like we were just never getting there. So we went farther and farther. It wasn’t until I looked at Google Earth later that i realized we WERE in the river most of our trip! It’s just that there was so little water in the river I didn’t recognize it. I thought we were in a tributary creek the whole time. The water was at most ankle deep in most places and the stream bed just a few feet wide at times. In contrast, on the hike I did with Jimmy the water was often about knee deep. Apparently during the course of 10 miles there are three major tributary streams (Box-Death Hollow being one of them) and a few springs that greatly increase the amount of water in the river.

It had become hot enough that Kona and Maree were starting to feel bad, so while they rested under a tree I forged on ahead to see if the main river was a few bends up. Of course, as I mentioned, I was already in the river, so no matter how far I went, so did the meandering river. Eventually I gave up and we decided it was too hot, so we headed back. That was a wise choice because at that time it had reached a point where Kona was burning her feet on the sand and I could feel the tell tell signs that I was getting too hot myself despite being by the water.

Late in the day when the heat started receding I was restless, so I decided to go check out a viewpoint I had discovered on another trip a few years ago, in winter. There is a huge cliff overlooking the river valley and I thought that it might make a good picture in summer when the trees were green, if it was a good sunset. Both the drive and the walk were longer than i remembered so I was really having to move fast to get out there. I could tell the sunset wasn’t going to be what I was looking for in the direction I needed it.

But then, I became totally distracted by a really weird, crazy sound I’d never heard before. I couldn’t tell where it was coming from or what it was, and I decided that it might be a distressed baby mountain sheep. Maybe it was injured, but the closer I got to tracking it down the more I became worried that it might have fallen into a waterhole in a narrow wash below me. The closer I got the more that seemed like the case until the sound completely stopped. So I stopped, and after a minute the sound started up again. Finally I scrambled down to the water hole and was stunned to see no sheep but instead some frogs. Those high altitude Escalante Canyon frogs were making a weird noise I’d never heard! They were also incredibly loud but their croak was not at all the sound the frogs make around St. George or Zion.

That distraction ate up a lot of my time but it led me into a neat little canyon area I had never seen before, so I was satisfied with my fate for the day.