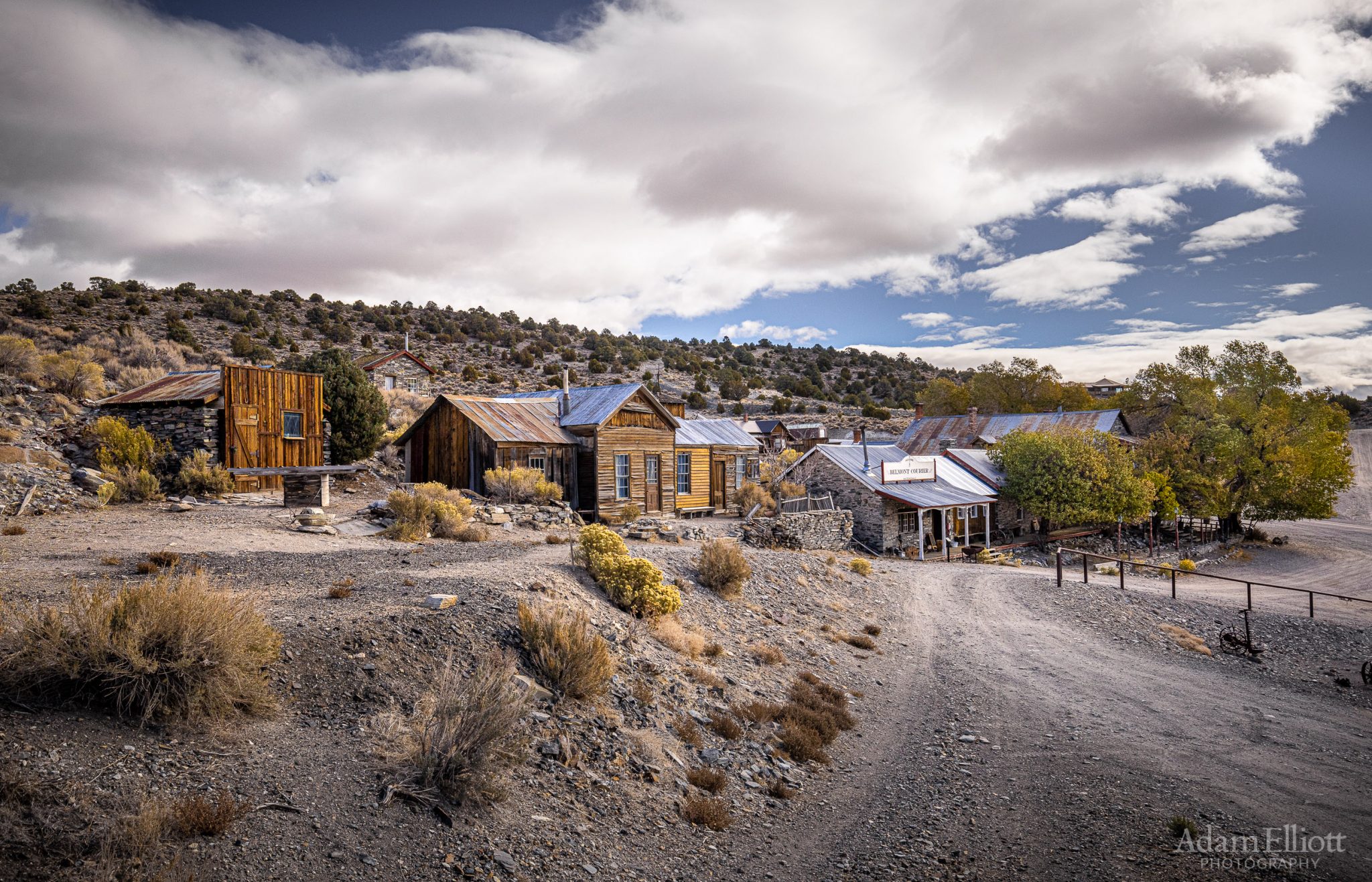 Belmont is a “living ghost town” (people still live there)  in a remote part of central Nevada. That is probably why it’s one of the best ghost towns i’ve been to. The residents are able to keep down the vandalism. There is even restoration going on, most notably with the two story stone courthouse that is now a museum.

I’ve been to a lot of ghost towns and I know that most of the sites I haven’t been to will not hold my attention long, so I made Belmont my first stop of the day along a route to visit several other places. But, I was so impressed with the town I stayed an hour longer than I anticipated. I was amazed that the road is paved the whole way to the town but if you go make sure you have enough gas for at least 100 miles of travel.

Belmont was a silver mining town started in 1865 but like many mining towns in the American West  the easy discoveries were mined out within a year and the town fell into decay almost as soon as it was built. But in later years other veins were discovered and even later mines and tailings were re-worked, so it never completely vanished. It had a peak population of 2,000 and was made the Nye County capital. Later the capital was moved to Tonopah, the next closest town (but still pretty far away). Today not many people live there full time, but there are enough to run a saloon and the courthouse. It was hard for me to tell because I visited during the pandemic when almost everything was closed.

The descriptions of the structures in these photographs are simply taken from the self guided tour brochure I got at the town center. There were a number of places I did not go, so there is more to see than what is here. I’ll leave that for you to discover.

A large juniper blocks the door of the Esser house. From the guide: “Matthew William Esser and his family lived in this brick house. Esser arrived in Belmont in 1866 and worked as a shoemaker. In 1872 he married Mary Ernst and they had two children. Esser opened a grocery store in 1874 in partnership with Harry Stimler. In 1880, he became associated with his brother-in-law, George Ernst. They were involved in mining and ranching in the area. Esser died in 1895 and his son Ernst Esser took over the store and family interests.”

The House of Tasker Oddie: “Tasker L. Oddie, a man who became governor and U.S. Senator of Nevada, lived in this house when he moved to Belmont in 1899. He purchased a house and part interest in the mine from the estate of Peter Bartell in October of that same year. The house was described by Oddie in a letter home as “a stone and brick building one story high, with three good rooms and two store rooms of wood.” While the floorplan rings true, this house is clearly not brick and I cannot explain the discrepancy. There is not a brick building next to it that you could confuse.

The front of the Combination Building, the cornerstone of the town. It “was built to house the superintendent and offices associated with the Combination Mining Company. The large impressive stone building was built at the head of Belmont’s Main Street. The Combination Mining Company purchased the original claims on the Transylvania ledge in 1867 and immediately built this building as well as a large 40 stamp mill in East Belmont. The cost of the building and equipment led to the bankruptcy of the company. George Roscoe Williams, a local attorney, acquired the building as part of a judgement against the mining company and lived in the structure until 1876 when he moved from Belmont. The building has been occupied most of the time since it’s construction which explains the excellent condition for the building.”

The view inside and out of the mill site. There were a couple of other mills at Belmont but I did not get to them.

The pride of the town is the partially restored Belmont Courthouse. It’s a museum now but, again, everything was closed, so I didn’t get to go inside. That was a bummer. The courthouse “was built in 1875-1876 at a cost of $22,000. It was built on the site of the first mill in Belmont. On the completion a grand celebration was held on July 4th, 1876 to celebrate the 100th birthday of our nation.”

The back of the courthouse appears to have been a jail. The walls are propped up but I was find standing here.

A peak at what I was missing inside the courthouse.