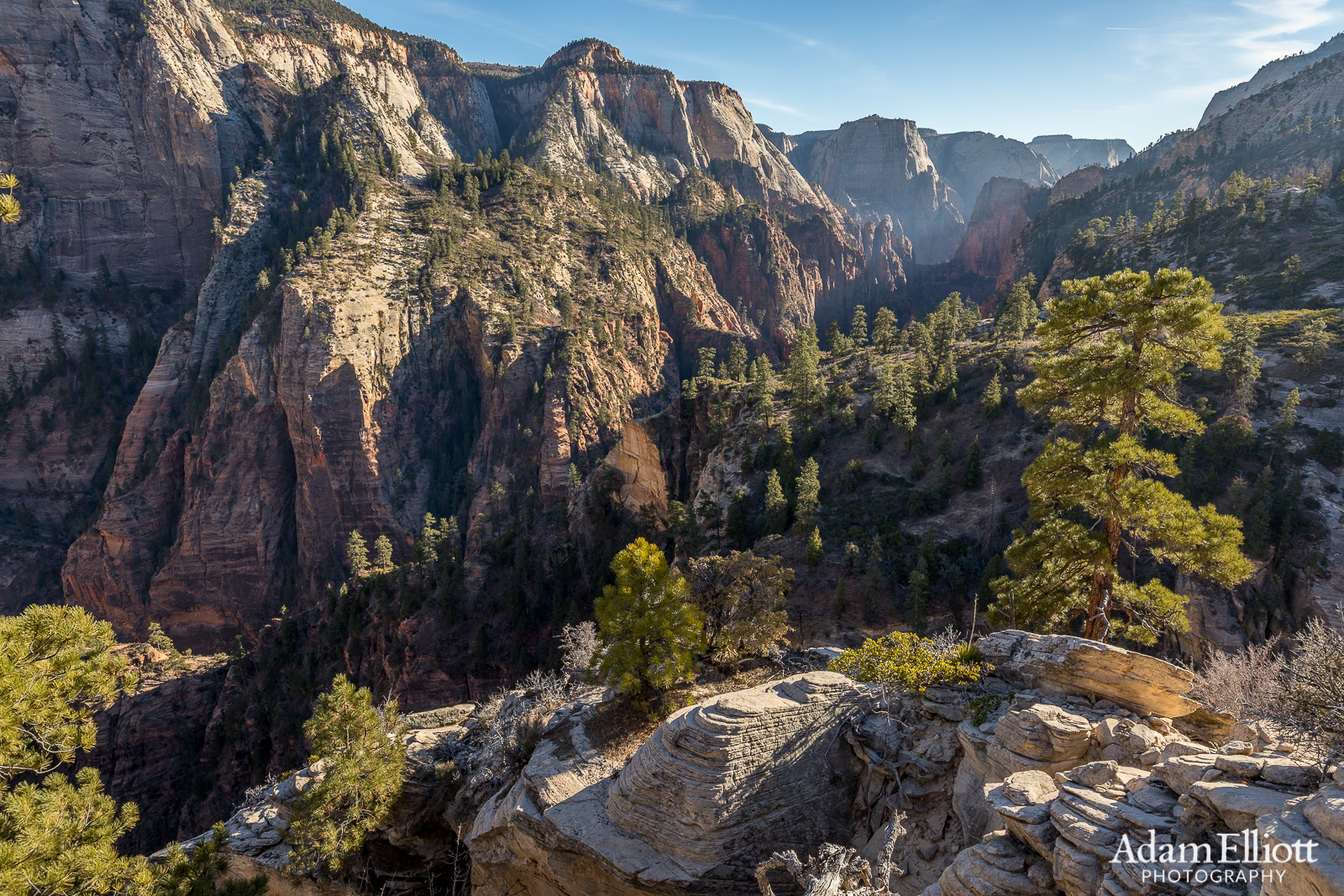 A canyon defined by what it is not

Imlay Canyon is one of the most famous technical canyons in Zion National Park. The first descent of it took 3 days and there’s even an outdoor gear company named after it.  I’ve never done it but I wanted to see it without the technical aspect so I looked into walking into the middle of it. I found a possible route that included a lot of up and down bushwacking and crossing several other minor canyons, and I decided it looked good enough for an exploration. So a week before winter solstice I decided to give it a try.

While I made it into the Imlay Canyon drainage I did not have time to continue to the center of the canyon due to being there during one of the shortest days of the year. Instead, when I first thought I was in Imlay Canyon, I became confused. Looking at the tight, gnarled topography of this area on my map I noticed that I was, surprisingly, NOT in Imlay Canyon. I don’t often make the mistake of being in an entirely different canyon than I think I am! I was in a tiny twisty little canyon right next to it, and had one more cliffy, brushy push up a steep slope to get into Imlay. This confusion due to the complexity of the terrain has apparently happened to so many other explorers that the canyon is officially named NOT Imlay Canyon! I have to say the name is appropriate.

I don’t like to read a lot about difficult off trail hikes before i do them because it’s very demotivating. I didn’t find out about the name  “Not Imlay Canyon” until I had already done the hike. Apparently the route I pioneered is already called the “Sneak Route” to Imlay Canyon, another appropriate name. Descending Not Imlay to the river is considered an expert affair, and somebody died on the first rappel in 2015.

This is a very complicated part of the Narrows that deserves explaining. To my immediate left was Imlay canyon and to my immediate right was Not Imlay Canyon. The twin peaks dominating the view directly across the river is The Mountain of Mystery, with it’s unreachable, mysterious cirque between the peaks. It’s hard to get a view of Mountain of Mystery from anywhere else. The first known ascent of the mountain did not occur until 2001. The incision to the right of Mountain of mystery is the terminus of Mystery Canyon. On the left side of Mountain of Mystery is Orderville Canyon, which meets the Virgin River just out of view and marks the beginning of the narrowest section of The Narrows. The Virgin River enters from the left and makes three horseshoe bends straight below. This complex area could be considered part of the heart of Zion. A few miles farther north you get into the headwater tributaries of Kolob Creek, Deep Creek and the North Fork.