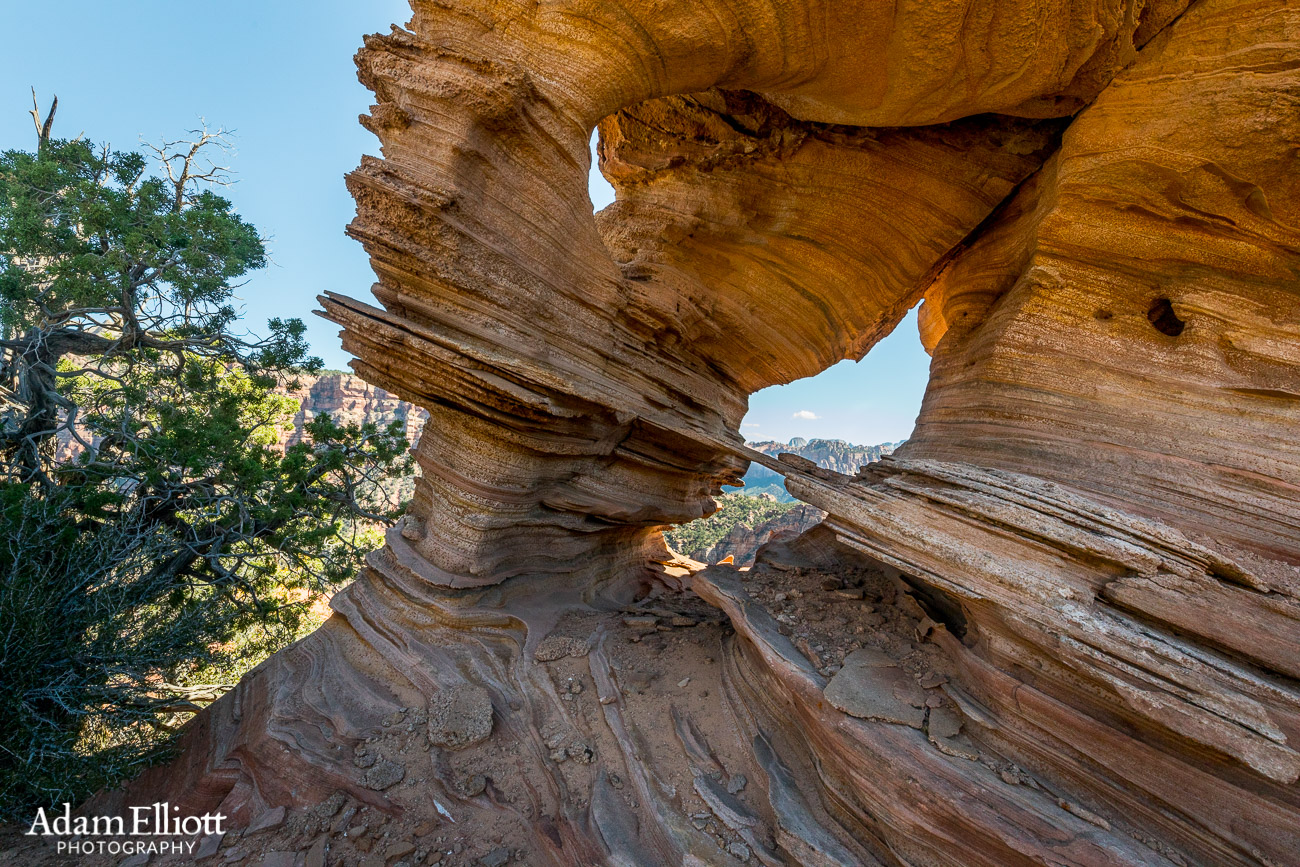 High up on an isolated cliff is the most amazing rock formation I think i’ve ever seen in Zion National Park. I’ve never seen any pictures of it anywhere or heard anybody ever talk about being there. And so I’m giving it a name: The Space Jockey. You might think that’s a weird name but there’s something to it.

One time before the internet existed I was standing in line for coffee and the famous photographer Fatali was standing in line next to me. He had a popular gallery in Springdale at that time with some very nice photos. One of the photos, of The Wave 2, was especially intriguing to me at that time. I wanted to know where it was so bad but he would not tell me. The Wave 2 and The Wave are so popular it can take years to get a permit to visit them, but in the early 90’s they were unknown, and their locations were guarded secrets. You had to build someones trust and have them take you to the site personally. That sounds extreme but there are countless examples for that behavior. A few years later some vandals destroyed a beautiful rock formation in Fantasy Canyon called The Teapot. It had been the subject of one of  Fatali’s photos. I still haven’t been to The Wave or Fantasy Canyon.

Nature photographers these days, in an overpopulated world, are always in a dilemma of wanting to share their art and their enthusiasm for the beauty of nature while at the same time risking their favorite places being destroyed by vandalism or over visitation.

Years later I was in the gallery of another one of my role models as a youth, David Pettit. He had a large beautiful print taken of the West Temple from the top of Mt. Kinesava. The view reminded me a little bit of the view I’d seen  from the top of Mt. Cleveland in Glacier National Park. Mt. Kinesava was directly across the street from David’s gallery but he still wouldn’t tell me how to get up there. I have since been up that mountain. It takes a lot of effort and David’s picture does it justice.

I spend most of my time, when I’m in Zion, looking around for new places I’ve never been or never seen pictures of. So when I found what I think is the most amazing hoodoo I’ve seen in Zion National Park, high on top of a cliff and isolated from the world, I had to consider whether or not to share it with others. I knew as soon as I saw it I had never seen pictures of it before anywhere, and when I got right up to it I noticed how very delicate it was. Much of it, even down to the parts that are covered in sand, is covered in very thin ribs of stone similar to some of the delicate formations you might find in Coyote Buttes. I decided at the time I would try and take pictures that didn’t offer many references in the distance.

It’s been a year since i’ve been there, and what I noticed is that I still haven’t seen any pictures of it. I also noticed that I haven’t been back to take better pictures. That probably has something to do with the difficulty in getting there. So I’ve decided to go ahead and share. Considering I have been in the area dozens of times and only discovered it last year, I think that whoever has the skill to triangulate this location and can put forth the effort to get to it probably deserves to have a look.