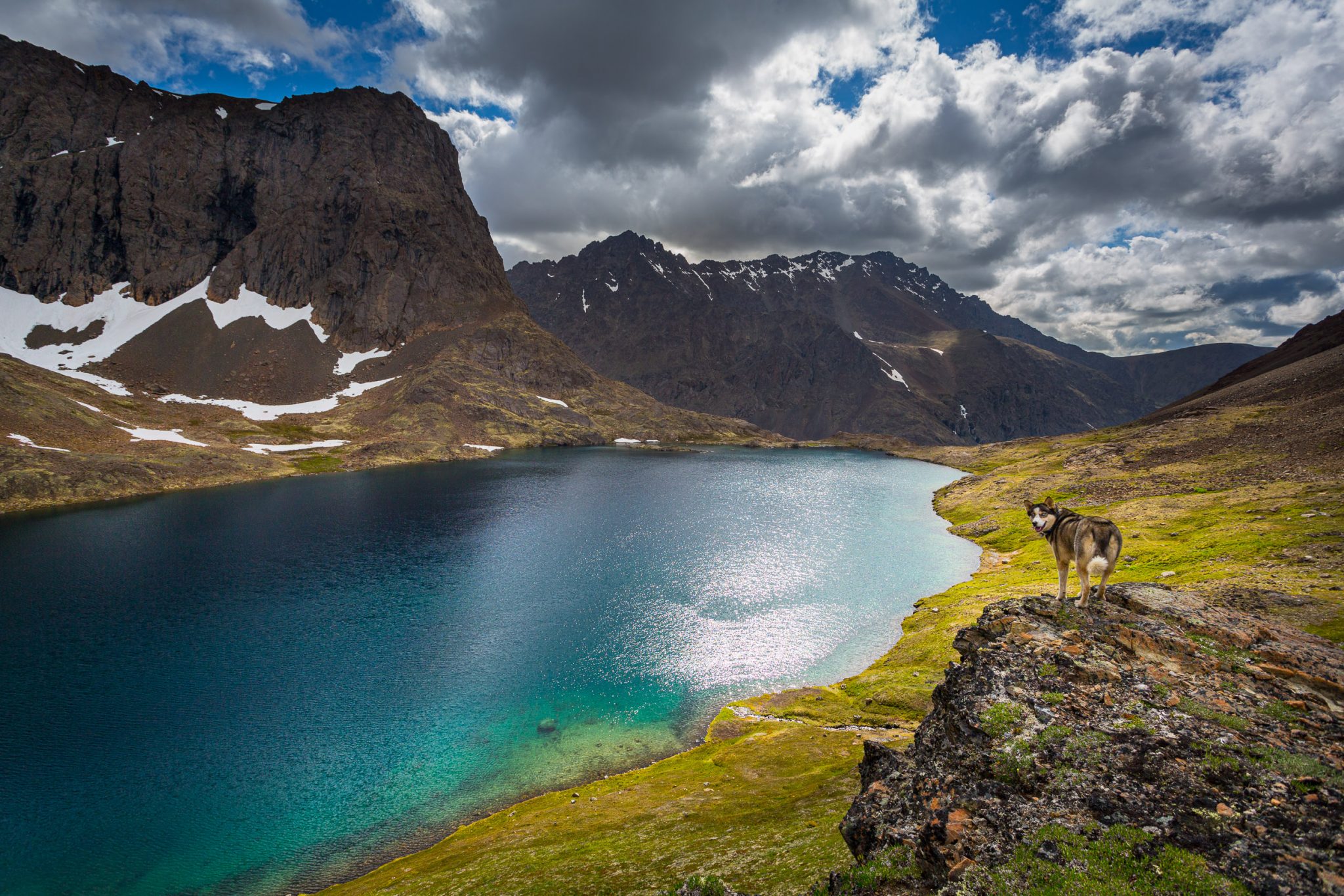 The Life of Kona

My dog Kona showed up on my doorstep as a stray dog, minutes after arriving home after a week on the Island of Hawaii. Our first order of business on arriving home was to  make a list to go to the grocery store while the home heated up (April in Alaska). I heard something and looked through the window at the front porch. There she was, a beautiful husky staring intently at our door knob. I opened the door and she walked straight into the house and sat down in the middle of the floor. Our dog Fisher, who only half an hour earlier had been reunited with us after over a week, ran over and… to my surprise, was not very mean to her, merely growling like he did with a strange human. Normally he was very territorial. I shooed her out of the house so we could leave.

About an hour later on our return from the grocery she was still there,  trying to interact with with a family half a dozen doors up the street. Maree coaxed the dog back, and started her nurturing routine. She had no tags and the next day I made her take the dog to the pound. But, over the next two weeks, nobody claimed her. Maree started making frequent visits and working on me to bring her home. I didn’t want another dog, Fisher was plenty to take care of, but eventually I caved, to make her happy. We named her Kona, because that was where we had just come from the day she showed up and ran into us, in an example of very unlikely timing.

Of course, I fell in love with Kona too, and so did Fisher. Fisher (you can read about him here) was the best dog I’ll ever have, but he was almost 13 years old, only had three legs, and was acting old at that point in life. The competition for his unlimited food-on-demand put a spring back in his step, and it wasn’t long before they became best friends. Kona attracted a lot of attention from other dogs and Fisher was her protector.

But Kona didn’t seem so sure that she wanted to stay with us. She ran away on a weekly basis. She would run away even when you were standing in the yard with her. She made a second home in the woods behind a local hamburger joint named Weebees. Sometimes she would run away for several weeks at a time. I would assume she just didn’t like us enough but then she’d show back up at the back door with an attitude like she’d only been outside for a few minutes.

One time she ran away for almost 3 weeks and I’d written her off when Maree got a call. We had tags on her of course and someone had found her. But, it wasn’t just a random stranger, it was her original owner. They lived miles away on the other side of the highway that cuts through the middle of Anchorage. Just as we met her on the way back from our vacation, she decided her vacation was over, and she had simply gone back home. We finally learned her story

One of the parks we would frequent. One day there were several other dogs and there was a fun game of chase where everyone got along great.

Kona was conceived on the Yukon River far to the north near the remote town of Eagle, Alaska. Eagle is down a long offshoot of the Top of the World Highway, the most northern road that crosses into the Yukon Territory. She was an accidental pregnancy on a sled team while they were out on the trail. While she could run faster than any dog we ever ran into (and then nip them on the neck in victory), she wasn’t built for racing. Instead, she was what they call a “haul” dog. She had a wider chest and bigger muscles for the purpose of hauling supplies. She had a sister.

Kona’s owner was in the National Guard. It turned out that he was being stationed in Mississippi, the polar opposite of Alaska. She’d been gone so long they thought she’d been killed by a car. She’d been hit previously and had nearly died with a broken jaw and fractured spine. That explained a lot of what we had noticed. In any event, the wife didn’t like her and since Mississippi is no place to take a dog born near the Arctic Circle, they gave her to us.

Kona was not the mountain climbing, bear fighting, super intelligent, loyal, empathic best friend that Fisher was, but we still had a lot of fun adventures together. And there were a few things about her that were uniquely bad ass. For one, she was fine absolutely wherever you were. If we were on a long rugged hike in the Alaskan wilderness, whereas Fisher would know that time was running out and we needed to get home so he could get in his comfy bed (a desire we shared equally), Kona was fine to never go back home. A perfect nomad, she’d lay down where she was tired rather than worry about going home. And of course she was remarkably resistant to the cold. There was a time I forgot she was outside for hours during a blizzard. I looked out to see her on her back, legs jutting into the air as if she was frozen solid. I freaked out only to find that she was sleeping on her back, in a blizzard.

Kona passed away this week. She was 14 well on her way to 15. She was my last direct link to my life in Alaska. Looking through her pictures I’m reminded what a great life we were able to give her. I’ll miss her greatly but I have the peace of mind of giving her everything I could. I have no regrets.